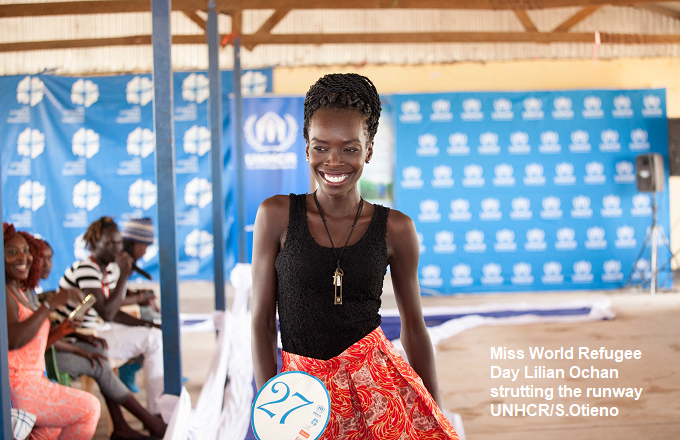 “My mother won many modeling titles and has been featured in many fashion magazines. I admire her and am grateful for her support.”

Brightly colored clothing symbolized the diversity in African culture and added a unique sense of belonging to refugees and host community members who turned up celebrate World Refugee Day on June 20 at Kakuma Refugee camp in Turkana County, Kenya. Burundian refugees beat ‘talking drums’, Congolese men and women performed traditional dances. And Turkana’s, the host community got involved too. There was also modern music from the Artists for Refugees project.

Kakuma is home to over 177,000 refugees from more than 15 nationalities. These numbers are expected to increase as the number of refugees arriving increases. 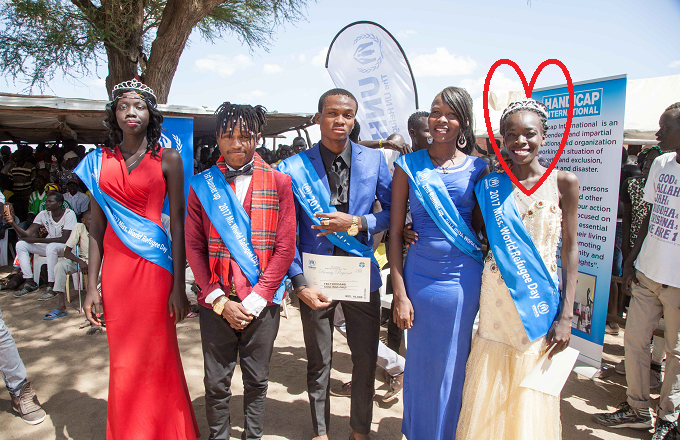 For the over 14,800 new arrival refugees received in 2017 alone, 20 June was their first World Refugee Day. This year’s event attracted refugees from as far as Kalobeyei settlement, a new settlement where refugees and host community live a more integrated co-existence.

Lillian Ochan, 22-year-old refugee and model from Ethiopia, was forced to flee her home country in December 2006 after armed men in military uniforms attacked their town killing many and forcing many more to flee. During her flight, Lilian and her younger sister, Lucy, got separated from their mother. For two years, the two little girls had no idea of their mother’s whereabouts. Lilian was only 11 years old, just two years older than Lucy.

In 2008, the two girls were reunited with their mother before crossing the Kenya – South Sudan border. The family of three has spent the past 9 years as refugees in Dadaab refugee camp before being relocated to Kalobeyei settlement early this year.

Lilian status as a refugee has kept from being : “I have participated in quite a number of modeling auditions, but the lack of proper identification documents have denied me a chance of being signed up as a model.” For refugees in Kenya, movement out of the camp without proper documentation could land one in trouble with the authorities. All refugees require a travel permit from the Government of Kenya through the Refugee Affairs Secretariat (RAS) for them to travel out of camp to other towns in the Country.

Lilian is among the over 100 youth from the host and refugee community who turned up to audition for the Mr. and Miss World Refugee Day pageant. Only 28 from those who auditioned made it for the finals held on 19 June. The pageant is part of numerous efforts in place by UNHCR and partner agencies to nurture and promote local talents.

Lillian’s story is one of resilience and courage. Being the eldest, and also the tiniest, in the family of 3, Lillian had to take care of her younger sister after being separated from their mother. She has had to make sacrifices for her younger sister. She tells us: “Lucy was short tempered and would get into frequent fights with her classmates. I had to join her in class 1 from class 3 just for her to continue with the education.”

Alexandria, Lilian’s mother was a refugee before meeting and getting married to Lilian’s father, Mr. Ochan. She fled her home country in the year 1994 during the Rwanda genocide. “I have been a refugee all my life. I have no idea what to expect from such a life,” she says.

During her flight from Gambella in Ethiopia, Alexandria lost her baby, barely a month before her expected date of delivery. “ What hurts me most is knowing the person who killed my unborn child and drove me from my homeland is walking freely while my daughters and I are seeking refuge in a country that’s not my own,” says Alexandria.

Currently, Lilian is training a group of 12 girls on modeling. She has turned her temporary shelter into a modeling school. Ajulu Thwol, one of Lilian’s trainees, clinched the second runner-up Miss world Refugee Day, Kakuma. Lilian owes her success in modeling to her mother and sister: “My mother won many modeling titles and has been featured in many fashion magazines. I admire her and am grateful for her support.”

Lilian’s younger sister, Lucy, is an upcoming fashion designer: “The dress I wore during the auditions at Kalobeyei primary school was designed by my sister Lucy.” 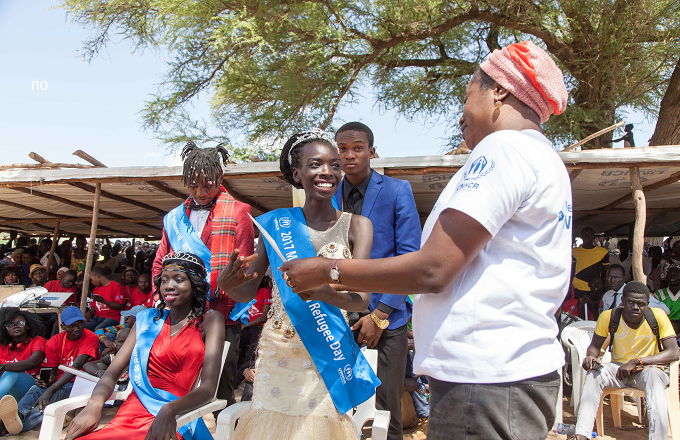 In the same event, speakers from the Government and the different agencies present reiterated the importance of reporting all incidents of corruption. Refugees were encouraged not to pay or give money for services as all services offered by the Government of Kenya, UNHCR and partners were free.

The preparation of this year’s World Refugee Day event was a combined effort by UNHCR and partners. On 16-18 June, UNHCR and livelihood partners organized a 3-day market-day at Kakuma refugee camp. The market-day themed ‘Bidhaa Zetu, Bei Bora’ Swahili for ‘Our products at affordable prices’ aimed at opening market opportunities for refugees and host community buyers and traders.

The market day also gave an opportunity for partner agencies to interact with beneficiaries and showcase their different programmers including: financial services, agriculture, and skills training among others. It also presented an opportunity for UNHCR and other agency staff to shop for unique products from different cultures.

To the refugees and the host community, the world refugee day presented a unique opportunity to showcase their culture and interact through business, cultural dances, modern music, fashion and poetry with a call to stand together with refugees.

At the end of 2016, there were 65.6 Million refugees in the world according to the recently released annual Global Trends report by the UN Agency for Refugees. Source:(UNHCR)