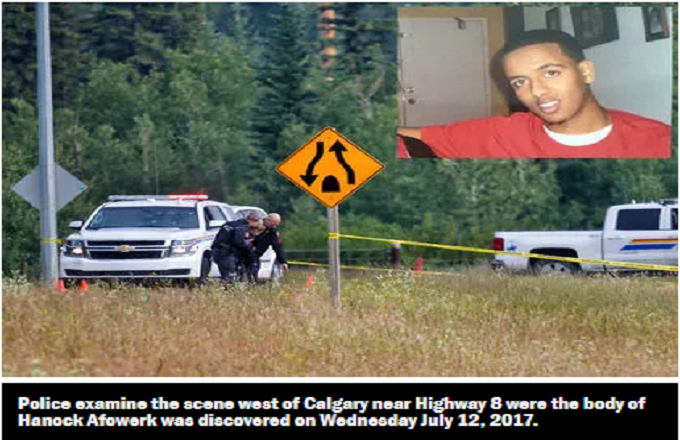 Calgary,  Canada, July 22, 2017(GCDC) - As the heartbroken family of Hanock Afowerk return his body home to Toronto for burial this weekend, investigators are trying to unravel how the affable 26-year-old  with no significant criminal background to speak of came to be the target of a deadly plot.

Police say his death and the deaths of Tiffany Ear, Glynnis Fox and Cody Pfeiffer, discovered on July 10 in Afowerk's burned-out car at a northwest construction site, are remarkable for their brutality and ruthlessness. Afowerk was found two days after in a ditch on a highway at the outskirts of the city.

The circumstances of his death and the fact investigators believe him to be the intended target of a plot in which the other three were collateral damage, contrasts sharply with the warm picture of the man painted by his family and friends.

Our family and friends all love Hanock incredibly," the family said in a statement to Postmedia. "He always had the biggest heart. This is a huge loss for everyone and anyone who knew him."

"It's a big shock. It’s something that we’re all worried and all asking questions about," Baron said. "We remember his voice, remember his laugh and remember him as a person and it’s so sad."

Investigators have, so far, not said why they believe Afowerk was the intended target, but Thursday they acknowledged Afowerk had crossed paths with some people who would play a "significant role" in what led to his death.

Yu Chieh Liao, also known as Diana Liao, was identified Thursday as a person of interest in the case, and someone whom Afowerk knew. Acting Insp. Paul Wozney of major crimes said "she had a relationship with Mr. Afowerk," not intimate, but "they were known to one another."

Investigators say Liao, a mysterious figure, described as "nomadic" with ties to different cities, including Calgary, Toronto and Vancouver, was last seen in the company of an unidentified black male in Moose Jaw on July 12 — the day Afowerk's body was found.

They believe a car she rented was at the scene of the fiery disposal of the three bodies at Sage Hill.

And the man Liao was seen with in Saskatchewan fits the descriptions of someone who was spotted at the scene of the fire, police say.

Liao's name came up a few days into the investigation, but police admitted they were "one step behind" the elusive 24-year-old who favours rental cars and hotels, and they've been looking for her since.

While questions continue to swirl around Liao, those close to Afowerk have been reticent to share much about the young man, who came west from Toronto less than five years ago "for more opportunity" to work.

An obituary for Afowerk was posted online in the days following his death and then promptly removed. A phone call placed to his sister was returned by a spokesperson, who provided a statement but said the family wouldn't be speaking further.

"We just want him portrayed better because he was a good person. Everybody here in the community really misses and loves him," said Troy McConnell, a childhood friend.

Much of the case being built by police seems to turn on Afowerk — the sole target identified by police, the owner of the vehicle burned in Sage Hill and the only one acknowledged by police to have known Liao.

Police say homicide detectives are holding back a lot of information to protect the investigation.

Postmedia has learned that investigators in Calgary called the Toronto police guns and gangs unit last week in connection with the case, but Wozney said such inquiries aren't uncommon.

He said Calgary police have good relationships with other forces, like the Toronto Police Service, "and we have certainly hedged those partnerships as part of this investigation," he said.

As far as court records are concerned, he only had one encounter with police, a relatively minor charge in 2010 that was then dropped.

Those closest to Afowerk are preparing for a funeral service this weekend at an Ethiopian Orthodox church in Toronto Saturday.

The adults who were once like brothers to Afowerk when they were boys have chosen to focus on the memories they made growing up together, riding bikes and playing ball in their old neighbourhood.

"His voice. His charisma. He could make anybody laugh. He could brighten the room instantly," Baron said.

"He was loved. He was actually loved." (Source: Postmedia)