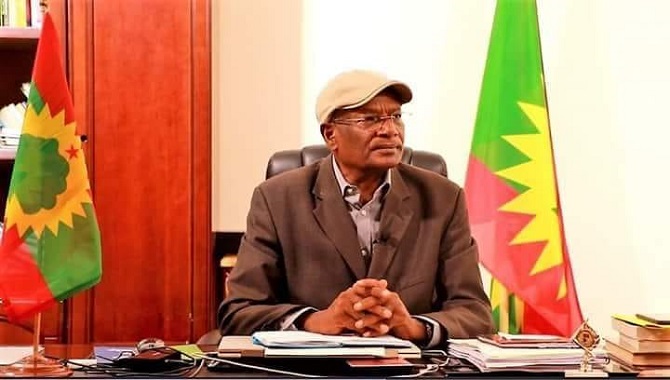 October 08, 2018 (GCDC) - Now its name scrapped from the list of terrorists and allowed to enter the country, Oromo Liberation Front openly declares its commitment for armed struggle denying that it did not return for a peaceful struggle. It also says that it will not disarm

A day after Ethiopian ruling coalition concluded its 11th party congress in the southern city of Hawassa, with the motto “national Unity for multifaceted prosperity” and resolving not to tolerate anymore lawlessness and displacement of residents, a radical -nationalist and secessionist group – Oromo Liberation Front (OLF) reportedly claimed that it did not have any agreement with the government regarding disarming its fighters and/or peaceful struggle.

As per a report by Walta, Dawud Ibsa who is the leader of OLF reportedly said that he will not disarm his fighters.

He added, “no one will disarm, and no one is able to make [us] disarm.”

Last week, a deadly violence broke out in Benshangul Gumuz region of Ethiopia in what seems to be a retaliatory measure to the September 26 killings of four senior security authorities of the region near Ghimbi, Wollega in Oromo regional state, by “unidentified gunmen.” At least 44 are reportedly killed and more than 70,000 displaced from Kamashi Zone, as per a report by authorities from Benghangul and Oromo regional states.

The same week, gunmen (“unidentified again”) carried out another deadly killing, this time against civilians, in Keffa zone of Southern Nations, Nationalities, and Peoples’ Region.

Addisu , Rural Political Mobilization Head and one of the executive members of Oromo Democratic Party (formerly known as OPDO), a party that administers Oromo region of Ethiopia, called for the radical Oromo Liberation Front to disarm its fighters and order them to government-designated camps where they will get orientation and training to reintegrate to the society.

As part of a demonstrated effort to broaden democratic space in the country, the government of Abiy Ahmed mobilized parliamentarians to lax the anti-terrorist legislation and the parliament, consequently, scrapped outlawed armed opposition groups including Oromo Liberation Front (OLF) from the list of terrorists.

Subsequently, armed opposition groups were invited to end their armed struggle and return to Ethiopia for a peaceful struggle. Seemingly, there was an understanding among Ethiopians that armed opposition groups who decided to return to Ethiopia agreed to the call for a peaceful struggle but that does not seem to be the case with the radical Oromo Liberation Front (OLF).

At the end of August, Prime Minister Abiy Ahmed rolled out a new project of reintegrating returning rebel fighters to the society naming Tesfaye Yigezu as head of the project within the office of the Prime Minister.

Yet, the extra mile that Abiy Ahmed’s government traveled in the interest of making a political dialogue and peaceful struggle a new political culture in the country does seem to be meaningless as far a group like Oromo Liberation Front is concerned.

In the second week of September, there was a brutal massacre in Burayu, a small town in the outskirts of western Addis Ababa, against ethnic Gamo and it happened a day after OLF leader, Ibsa Dawud, arrived in Addis Ababa where his supports spread fresh blood from slaughtered ox on his forehead – a ceremony that puzzled many Ethiopians. At least, 60 civilians were massacred in Burayu.

OLF also seem to have coordinated other violence in recent time. Federal Prosecutor linked the June 23 grenade attack in Addis Ababa during a rally in support of Prime Minister Abiy Ahmed to members of Oromo Liberation Front (OLF).

There is a reported new partnership between OLF and Tigray People’s Liberation Front (TPLF) – another radical -nationalist party that created and dominated the ruling coalition for more than 27 years – and lost the power struggle from within. As well, the OLF is believed, many Ethiopians believe so, to get financial and other forms of support from actors in the Arab world who seem to have interest in the break up of Ethiopia.

Meanwhile, reports by rights group indicate that the situation in the latest areas of violence in Benshangul and Keffa zone is still tense despite members of the defense forces is deployed to the region. And they are calling for the government to act more seriously to stop further violence in the region and resolve it durable.   ( Borkena News)