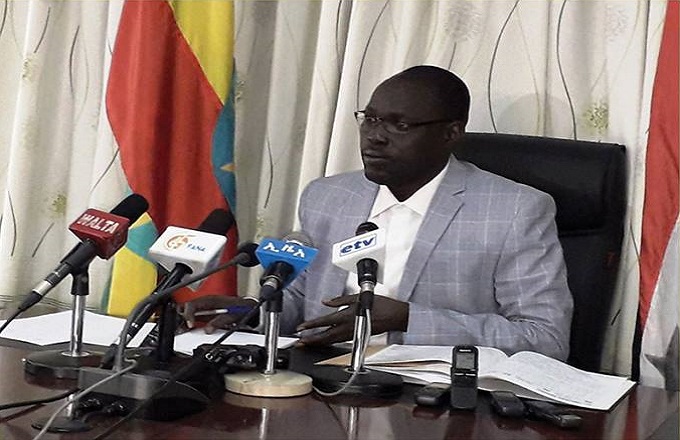 October 31, 2018 (GCDC)  - Gambella People’s Unity Democratic Movement confirmed its readiness to work diligently to restore peace and stability in the State, and sustain the ongoing socio-economic and political reforms

a press conference held yesterday, following the conclusion of its evaluation meeting, GPUDM’s Chairperson Omod Ojulu said that Central Committee of the Movement has conducted its meeting for ten consecutive days and evaluated the Movement’s performance.

According to him, during the meeting, issues related to peace and security, leadership gaps, rent-seeking, and others were looked into. Leadership who had been involved in ill-activities had been identified. And the State’s President and Vice-President have resigned from their positions upon their free will, he said.

Following the evaluation, he stated, three seniors and one member of the Movement who found accountable for malpractices, and failing to discharge their responsibilities are demoted. Each member committed illegal activities would be accountable for each and every he/she committed, the Chairperson underscored.
“The Movement will not compromise peace and security, and the endeavor to promote the benefit of the people. The newly elected leadership of the Movement would work persistently to address the challenges that have been singled out along with pertinent stakeholders, especially the peoples of Gambella,” he reaffirmed.

Gambella was in ethnic conflicts where its security was at the brink, but now peace and stability are restored, and the Movement vowed to maintain the ongoing nationwide reforms.

Moreover, according to Omod, the Movement would soon appoint the State’s new President; and to that end, they will work jointly with the respective zonal administration.
The new leadership has many assignments facing it, including building good governance, and enhancing the economic benefits of the people of the State, Omod reiterated.

Finally, the Movement called on all people of Gambella to join hands in order to transform Gambella into prosperous State. (EPA)