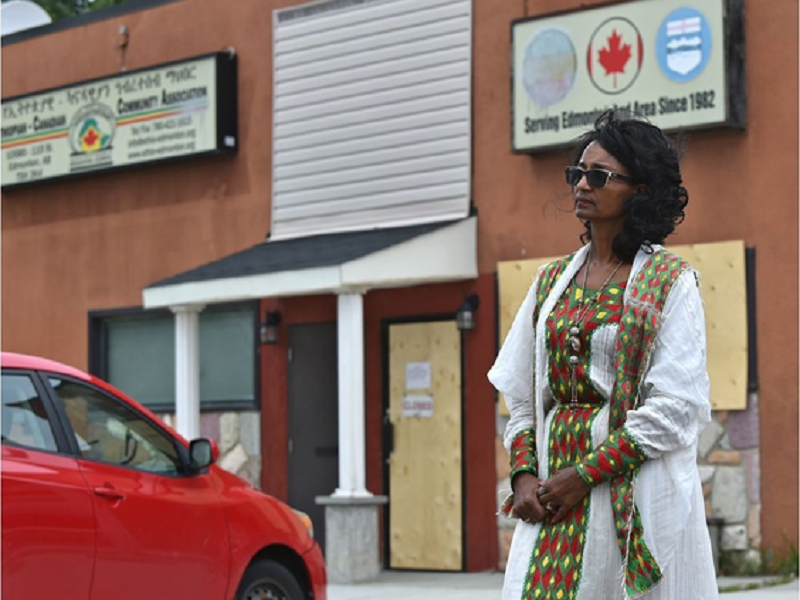 Edmonton, Canada, August 10, 2020 (GCDC) - Members of an Edmonton Ethiopian group are disheartened after an apparent vandal smashed windows at their community centre and defaced their sign.

The Ethiopian Canadian Community Association, 10585 115 St., has been damaged twice in the past month, the association’s Meheret Worku said.

First, on July 10, someone used paint or a corrosive substance to blot out the Ethiopian flag on the centre’s signboard.

On Aug. 2, members of the community arrived and found multiple windows broken, including on the front door.

“It has never happened,” she said in an interview. “We’ve been there since 1987 and we’ve never experienced anything like this.”

Worku said there are around 7,000 Ethiopian Canadians living in Edmonton. She called the community centre “our home away from home. For most newcomers, this is where they meet the rest of their (Ethiopian) family.”

The vandalism comes at a time of renewed volatility in their home country.

Many Ethiopians rejoiced when Abiy Ahmed became prime minister in 2018. Ahmed brought in economic and political reforms and won the Nobel Peace Prize for ending the country’s longstanding border dispute with Eritrea.

Tensions returned, though, since the murder of the popular singer and activist Hachalu Hundessa in late June. According to the BBC, more than 80 people were killed in the ensuing unrest. Hundessa, like Ahmed, was a member of the Oromo ethnic group.

Worku and other members of Edmonton’s Ethiopian diaspora recently held a vigil for Hundessa at the Alberta legislature.

Edmonton police spokeswoman Cheryl Voordenhout said police continue to investigate the damage to the community hall, including reviewing video footage from the area.

“At this time it is not known whether the incidents are related,” Voordenhout said in an email.

While there are no suspects, Worku worries what happened may have been targeted.

“The reason we say this is an attack on our community is that why would anybody spray just the (Ethiopian) flag?” she asked. “It makes us feel very not safe now.” By Jonny Wakefield (Edmonton Journal)