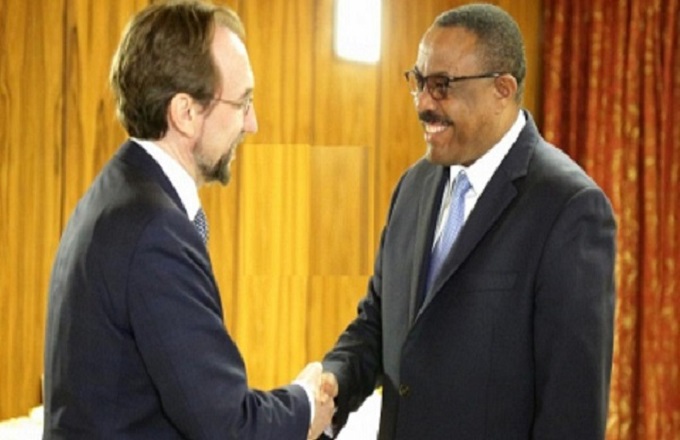 Addis Ababa, May 04, 2017(GCDC) - was a busy day for the United Nations Commissioner for Human Rights, Zeid Ra’ad Al Hussein, who is on an official visit to Ethiopia.

The UN chief was received by Prime Minister Hailemariam Dessalegn during which meeting they discussed rights issues and challenges of the country. Both parties committed to working in concert to protect the rights of the citizenry.

State-affiliated FANA broadcasting corporate reports that their discussions largely revolved around a recent report into the anti-government protests that claimed over 600 lives.

Zeid had earlier on Tuesday met with the head of the Ethiopia Human Rights Commission (EHRC) who authored the recent protest death report. Ethiopia had refused to accept independent investigators insisting that it was well placed to investigate the deaths internally.

After meeting the premier, the High Commissioner also met and exchanged views with the country’s opposition parties.

In all, eleven political parties attended the meeting raising questions and concerns on what they expected to be sorted out relative to the human rights situation in the country. He also held a meeting with the head of the legislature, Honorable Abadula Gemeda.

The UN top official is due to address a press conference today on the issues raised following his meetings and discussions with various stakeholders in the country.