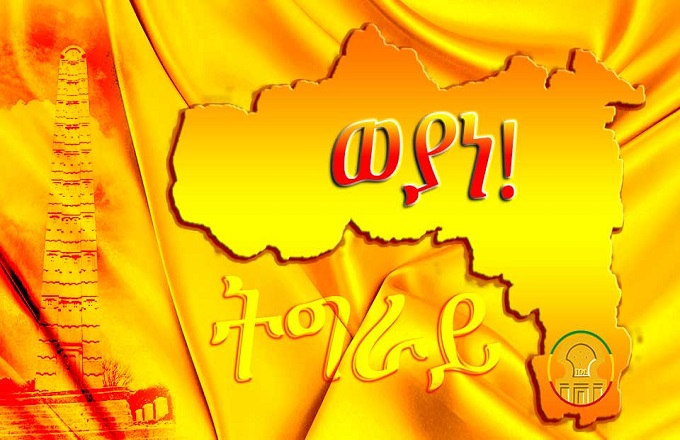 February 18, 2017( GCDC) - Historically the people of Tigray have been mobilizing and leading peoples of the horn of Africa to defend from foreign and unfair attacks originated from Europe and Egypt.

These people by nature are very patient and tolerant. They are willing to negotiate as they are great diplomats.  They treat others and their interests with care and respect. They never go out of their way to take advantage of others as means of solution to their problems even during the worst disastrous times. As recently as in the 19th century, led by their great emperor Yohannes IV, they were able to secure the sovereignty of their country, Ethiopia by fighting the ruthless and bullying colonialist powers repeatedly in many fronts such as in Tigray, the Afar area, Eritrea, and Gondar, while others so called leaders in the south were closing deals with the enemies of Ethiopia to their benefits regardless of the interests of their country. Emperor Yohannes IV was killed defending his people in the Gondar front, it should be noted.

In the 20th century, after a century long operation, mistreatment and domination by others they stood up, said enough is enough. They waged a very strategic struggle (Weyane) against their enemies to become victorious to all nations and nationalities of the region.

Tigray incurred a loss of more than 60,000 martyrs and more than 100, 000 wounded heroes to accomplish this historic act.  They created ethnically based federalist democratic system after they demolished the merciless and brutal military government of Ethiopia, the DERG. They also became the hopes of the economically devastated neighboring countries of the East African region. Their strategic mission was developing together. They strengthened IGAD and came out as the strongest and powerful leaders of the region. The long standing war between the people of Eritrea and the previous governments of Ethiopia was over. The very long Sudan war between the south and north ended peacefully as it was brokered by the Weyanes. Some stateless regions like Somalia became relatively peaceful. The east African region once well known to the world as the most volatile and hopeless regions started to show progress in peace and infrastructure building.

Those fighters who originally liberated Tigrayans and then Ethiopians from the dictator Mengistu’s DERG regime went to Rwanda as UNAMIR in 1994 to 1995 to help the Rwandese breath peace, to the Sudan as UNMIS, to Darfur as UNAMID, to the South Sudan as UNMISS, to Abyei as UNISFA, and to Burundi as AMIB during 2003 and 2004 where they supported the implementation of the country’s peace agreement. The greatest contribution being the deployment to http://www.providingforpeacekeeping.org/2014/04/03/contributor-profile-ethiopia/ Somalia where they have completely changed history by giving the Somalians a chance of peace against the hopes of the west which was expecting failure of their mission. The Weyanes, men and women, led at first by their great late leader Meles Zenawi are known for their devotion to change not only Ethiopia but also the whole East African region out of the deeply rooted poverty which is the main cause of all weaknesses and disgrace of the people of the region. They represented Africa and negotiated with the rest of the world in the very challenging and sophisticated issues of Climate change. It is highly likely that they will come up to hold the highest office in the world health organization.

They started crafting blue prints to unify Africa economically. They made Ethiopia to be financially capable of building clean energy sources on its own without the usual influence or interference of the western countries. They built mega hydroelectric power dams such as Tekeze, the Gibes, Beles, Fincha, Halele, Genale, and Chemoya. Rightfully, they started building the Grand Ethiopian Renaissance Dam (GERD) on the Blue Nile regardless of several disapprovals from the west and their enemies. They made Ethiopians contribute to build the dam as the Egyptian government and other enemies have successfully blocked funds or loans to build the GERD. In doing so, they made Ethiopians more united, but it seems that they are up to uniting the whole African continent not just Ethiopia. This will be eminent when the countries in the east African region are economically integrated in such as sharing energy from the GERD and other sources. The infra-structure building was not only on the energy sector but also on others.

They have successfully built and are still building the most effective city and cross country train transportation networks not only within Ethiopia but also linking the country to the neighboring countries. They build roads so Ethiopia will be connected with the whole of Africa. They have met most of the Millennium Development Goals (MDGs) by building several health centers and hospitals. They built many schools, colleges and universities so every Ethiopian can have at least basic education to read and write so they can understand basic health practices, perform modern agricultural practices, communicate with cell phones to get prices of their products and etc... Their diplomatic ties to their brothers and sisters in Africa, the Middle Eastern countries, the west, mostly Asian countries and the world as a whole is exemplary. For this reason, many countries are bringing their business men and women to explore the opportunities of investing in Ethiopia, and Africa as a whole. The world’s most powerful and influential companies are racing to invest in Ethiopia and the neighboring countries for the Weyanes used not only friendly economic policies to the investor but also maintained peace in the region. The dynamic has changed now. Mega business deals between countries like Ethiopia, Djibouti, Kenya, Sudan, even Somalia with the rest of the world are happening day by day.

The Weyanes, the true sons and daughters of Ethiopia who offered and sacrificed their precious lives for the sake of the people’s liberty, dignity and development should always be praised and respected for what they have provided to the East African people. The sense of cooperation among Africans and solving African challenges using African people are being developed in the continent. The Weyanes have still yet to play a bigger role to the pan African cause, uniting Africa.

They were very few with grand objectives when they started on Lekatit 11 forty-two years ago and became successful after paying so much sacrifice. They became the hopes of very many desperate people who were looking forward to see one day that they can get back their dignity, that they can learn and write with their own language (a language that they understand well), that they could be administered by the people who they have elected not by strangers assigned by someone else, that they could go to school in their neighborhoods, etc… and the Weyanes prevailed. I am proud of them, but I hope you do too, if not, please try to learn why they started their movement and how they waged their struggle, how they managed to overthrow the then Africa’s biggest army, how they were supported by their people and became successful. Sources: Tigrai Online