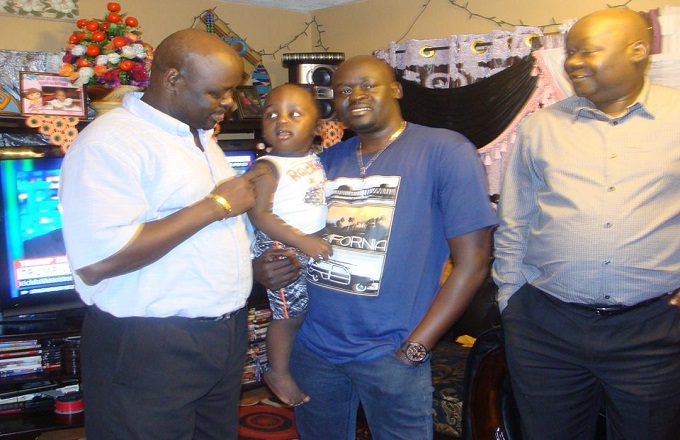 La Crescent, MN, April 25, 2017 (GCDC) - The act of welcoming refugees has become a controversial topic, but Kathy Rosenberg and her Refugee Response Team are working to change that.

Based at La Crescent’s Prince of Peace Lutheran Church, the team has not only been educating itself about refugees, but it has sponsored Kwot Gora, an Ethiopian refugee, since February 2016.

The Refugee Response team will host a speaker and education series in April, “Tuesdays in April — Refugees: A World-Wide Crisis.”

“My husband Randy and I, we were paying attention to the news about the refugee crisis in Syria,” Rosenberg said. “It was disturbing. We started the conversation asking what we can do and what our church can do to respond to this.”

Rosenberg was inspired by her mother, Dona Krienke, who helped Hmong refugees settle in the Eau Claire and La Crosse area after the Vietnam War.

“It was a mission of her heart,” she said. “She dedicated decades of her life to refugee work. She passed away in May 2014, and when this stuff started happening I thought about her response to the Hmong, which was, ‘What can we do?’”

The first day the Refugee Response Team met in January 2016 was also the day the members Gora. He was introduced to the community through a talk with the Rev. Kent Johnson.

“As a team we want to become more educated selves. With knowledge and understanding comes empathy and with empathy, a reason to reach out and help people instead of being afraid of them and hating them. Instead loving them,” she said.

Gora shared his story as an Ethiopian refugee. He has been in the U.S. for 20 years. Most of his family is currently at the Dadaab refugee camp in Kenya.

As members of the Anuak ethnic group, they fled Ethiopia after the December 2003 massacre. More than 400 Anuak men, women and children were killed in three days.

The Anuak are majorly farmers and are from the Gambella region of Ethiopia. The aggressors in the attack have not been made clear, and it has been blamed on the Nuers, another ethnic group, as well as the Ethiopian government.

“We helped Kwot complete his resumé that resulted with him being hired as a refugee resettlement counselor through Catholic Charmove to Austin. We felt like it was divine intervention. This man comes to our congregation and ends up with a job helping other refugees,” Rosenberg said.

Gora was let go after President Donald Trump’s refugee immigration ban in January, which has threatened the potential for refugees to enter the country.

Gora, who was living in La Crosse when he met the Refugee Response Team, is currently unemployed and is trying to support his family in Kenya. He is an American citizen.

The Refugee Response Team has given Gora $300 a month, as well as over $3,000 to help with a brother’s medical stay in Nairobi. They have also given money to Gora’s family to travel from Nairobi to Dadaab.

According to Rosenberg, before the team started helping Gora’s family the money his family received in Dadaab only covered two weeks’ worth of food.

The average wait time in a refugee camp is 17 years. They have to fill out extensive paperwork proving their identity, medical records and family records. They go through rounds of interviews and background checks.

According to the United Nations Refugee Agency, one in 113 people were either a refugee, asylum-seeker or an internally displaced person in 2015.

Refugees are defined as people forced to flee their homes due to persecution, violence or war.

“Our main goal is education,” said team member Cyndy Reichgelt. “We meet once a month and spend that time learning. We watch TED talks and try to learn about what’s going on as much as possible.’

“Tuesdays in April — Refugees: A World-Wide Crisis” is meant to educate the community about the refugee crisis happening in today’s world.

Among others, the series will feature Somalian refugee Habibo Haji and John David, an immigration lawyer.

The Refugee Response Team meets once a month on Sundays at Prince of Peace Lutheran Church in La Crescent and is open to new members. Source: La Crosse Tribune

By Alex Graaff@ This email address is being protected from spambots. You need JavaScript enabled to view it.