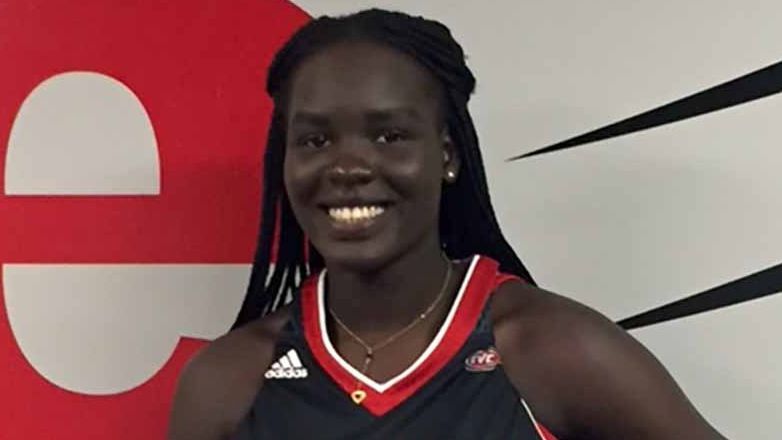 August 31, 2018 (GCDC) - Basketball tucked under one arm, Ajulu Thatha steps out of her Indianapolis apartment and into a hot and humid July day. Her long braids flop over her shoulders as she hops into the front seat of the car. She's quiet. Until the topic turns to her newfound passion: Basketball.

Thatha has played the sport for only five years, and she has been in the United States for only six. She was inspired to give basketball a try after attending an Indiana Fever game within months of her plane landing from Ethiopia.

Six years later, Thatha is a 17-year-old senior at Decatur Central High School and has committed to play in college at Southern Illinois University Edwardsville. Hers is an unlikely journey that started in Gambella, Ethiopia, and has taken her along a path that twists like the  (Openo) Baro River, where she used to splash and play back home. Basketball has given her an opportunity that felt out of reach as a 12-year-old learning English in a foreign place. The opportunity to go to college manifested because of Thatha's perseverance, and it was her courage that allowed her to seize it.

Of course, that doesn't mean the journey has been easy. Let's start with the basketball.

Standing at 6-foot-2, Thatha is often described as "raw," which is to say that that while she hasn't been playing for very long, her potential is significant. She primarily plays in the post but has started to step out to the wing. She has superb athletic ability, and unrefined skill.

"She's got more upside than anyone I've been around lately," Decatur Central coach Daryl Gibbs said in a phone interview. "If you were going to ask me what kind of player I'd want on my team in today's world, it'd be her because once her skills get up to her athleticism, she'll be really, really good." Source: (ESPN W)