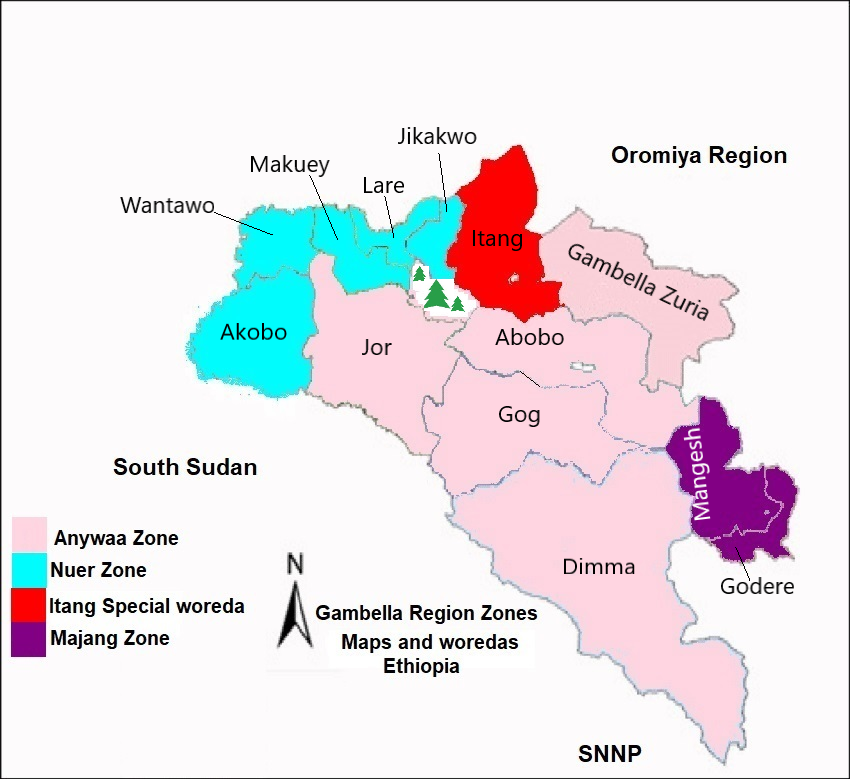 Gambella or Gambela, (Amharic: ጋምቤላ) , is one of the nine ethnic divisions (kililoch) of Ethiopia, its capital is Gambella. The Region is situated between the Openo (Baro) and Akobo Rivers, with its western part including the Openo (Baro) salient.

Located in Gambella is Gambella National Park, which covers approximately 5,061 square kilometers or 17% of the Region's territory

The CSA reported that for 2004-2005 3,734 tons of coffee were produced in Gambella, based on inspection records from the Ethiopian Coffee and Tea authority. This represents 1.64% of the total production in Ethiopia. The CSA could not provide livestock estimates for Gambella. In a 26 May 2000 report, the FAO observed that at the time Trypanosomiasis was a major problem in cattle for this Region. There was an epidemic of this disease in the area during 1970.

Gambella is believed to have major oil resources. In June 2003, the Ethiopian government signed an agreement with Petronas of Malaysia for the joint exploration and development of oil resources in Gambella region. Petronas then awarded a contract for seismic data acquisition to China’s Zhongyuan Petroleum Exploration Bureau (ZPEB) October of that year.

The Water and Mines Resources Development Bureau of Gambella announced January 2007 that it was initiating a program that would drill 13 new manually operated wells, 54 new deep water wells, and develop four springs. This would provide access to drinking water for 26,000 inhabitants, increasing coverage for the state to 42 percent from the existing 27 percent, at a cost of 6 million Birr. Construction of an asphalt road 102 kilometers in length and connecting Gambella City with Jikawo by way of Itang was begun in 2008 with a budget over 446 million Birr.

Based on the 2007 Census conducted by the Central Statistical Agency of Ethiopia (CSA), the Gambela Region has total population of 307,096, consisting of 159,787 men and 147,309 women; urban inhabitants number 77,925 or 25.37% of the population. With an estimated area of 29,782.82 square kilometers, this region has an estimated density of 10 people per square kilometer. For the entire Region 66,467 households were counted, which results in an average for the Region of 4.6 persons to a household, with urban households having on average 3.8 and rural households 4.9 people.

Gambella is the historic home of the indigenous Anywaa. Values for reported common indicators of the standard of living for Gambela as of 2005 include the following: 44% of the inhabitants fall into the lowest wealth quintile; adult literacy for men is 57.5% and for women 22.8%; and the Regional infant mortality rate is 92 infant deaths per 1,000 live births, which is greater than the nationwide average of 77; at least half of these deaths occurred in the infants’ first month of life.

Gambella is subdivided into three administrative zones and one special woreda;

Anywaa zone is by far the largest of the zones of Gambella Region and also includes the capital, Gambella. The terrain is mostly flat at elevations between 400 – 550 meters above sea level but with the eastern fringes of Anywaa zone and in particular the easternmost zone, Majang, being partly in the highlands and going up to an elevation of ~2000 meters near the eastern border.

Governors and chairmen of the ruling party

The governor of Gambela Region is usually also the chairman of the ruling party in Gambella Region, an ally of the ruling party coalition of Ethiopia, the EPRDF. The parties allied to the EPRDF changed over time so the following list also provides their names. The list starts in 1991 after the EPRDF won the Ethiopian Civil War in 1991 and with the formation of the first allied party in Gambela Region.