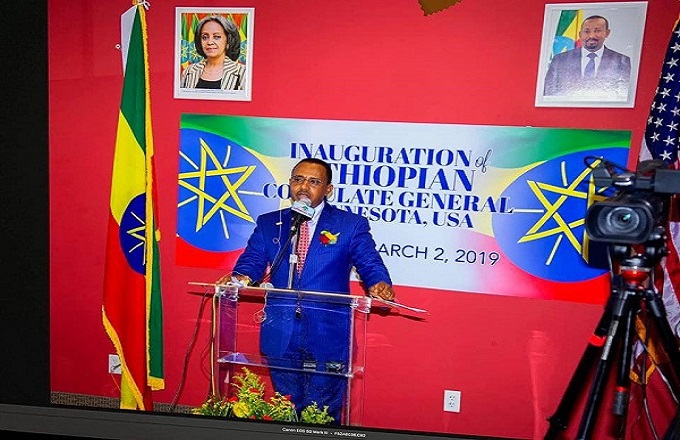 March 03, 2019 (GCDC) - Ethiopian Consulate in Minnesota is inaugurated on March 02, 2019 and Oromo regional state president Lemma Megersa was the guest of honor for the occasion. Critics see something wrong with the protocol in the

the occasion of the 123rd anniversary of Adwa Victory across Ethiopia and in the Ethiopian embassies around the world, Lemma Megeresa’s appearance in Minnesota, United States, to officially open Ethiopian Consulate has got rolling eyes reactions from Ethiopia.

Birtukan Ayano, State Minister for the Ministry of Foreign Affairs of Ethiopia, used to be Ethiopian Ambassador to Canada before Abiy Ahmed’s government, also attended the ceremony. US authorities from the city were also present during the occasion and March 2 is declared to be Ethiopian Day.

Lemma’s Presence on the occasion was not disclosed as it was intended to be a surprise, based on citizen’s report on social media.

The tumult about Lemma being the guest of honor during the opening ceremony, in the eyes of critics, is that it defies protocol and represents hierarchical confusion within the government.

As much as there is indifference to it, as far as a considerable number of Ethiopians are concerned, critical voices question why Lemma had to inaugurate an Ethiopian consulate while he is president of Oromo region of Ethiopia, not a federal government authority.

Criticism against Lemma’s presence in Minnesota, there is a considerably high number of ethnic Oromo Ethiopians but also there are a good number of other Ethiopians, surfaced in the wake of Lemma’s regional administration massive demolition of the houses in Legetafo town which left thousands of defenseless residents homeless.

Dereje Habtewold is a journalist working for Ethiopian Satellite Television (ESAT) remarked in Amharic on his own social media page, “There is such a thing called protocol. Why is Lemma in Minnesota while he should have been in legetafo?”

Lemma Megersa attracted much criticism this past week after his speech in Afan Oromo language in his regional council in which he told members of the council that his government is working on settling hundreds of thousands of ethnic Oromo, displaced from South Eastern parts of Ethiopia, in and around Addis Ababa – a city over which radical Oromo ethno-nationalist elements claim ownership right.

Lemma did not come out to explain his words regarding his alleged words about the plan to resettle ethnic Oromos in Addis Ababa. His rural politics mobilization head, Addisu Arega, composed a long social media status update on Friday and he said Lemma’s speech was taken out of context – which many find not convincing. Some say Lemma himself should have explained himself. ( borkena)