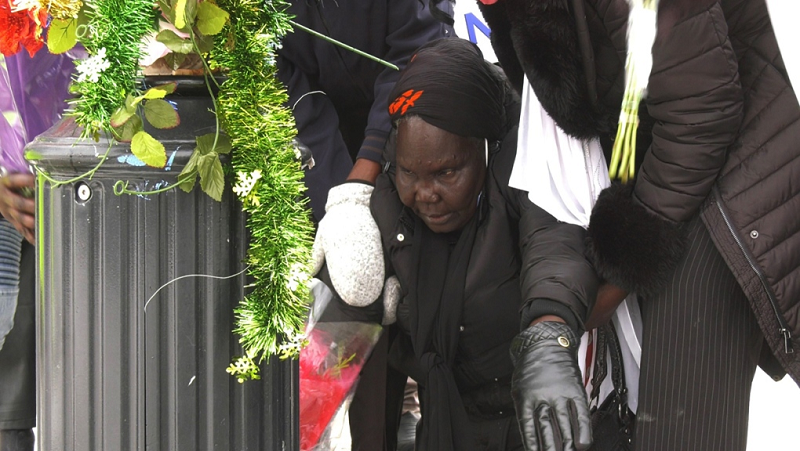 November 22, 2022 (GCDC) - The mother of Latijor Tuel shot and killed by police earlier this year arrived in Calgary from S. Sudan and calls justice for her son.

“Latjor was in need of help, not a bullet to his head or his chest,” said Tuel’s mother Rebecca Aker Akol who laid flowers at the scene of where her son was shot.

Tuel was a child soldier who grew up in Sudan and moved to Calgary in 2000 to start a better life for himself.

Akol had not seen her son for nearly two decades but knew he suffered from a post-traumatic stress disorder and never imagined their final visit would eventually take place at a Calgary cemetery.

Khor Top, the president of the Calgary South Sudanese Community, says more mental health resources should have been dispatched prior to Tuel’s death.

“He was struggling, he didn’t need a bullet, he needed counseling, trauma treatment, and medical treatment,” Top said.

“Justice now means holding people accountable and having a fair way of doing things instead of police being just the safeguard of the communities. If there is any issue in the future for somebody who's struggling, justice means calling on those that can help somebody or get them to hospital.”

The top adds that rebuilding the relationship between Calgary police and the local Sudanese community is about a willingness to increase safety.

“So, if the police are willing to build the relationship and the trust with the community, I think it's not it’s not difficult,” he said.

“It just takes a willingness to work together as a community and to be there for the community members for the safety of all. A building that relationship is paramount.”

Charles Odame-Ankrah with the Calgary African Community Collective also weighed in on the issue and called on police to implement better de-escalation skills.

“Latjor didn’t have a gun, he had a stick and a knife. He was just looking for help. He was going through mental stress. That's how tragic it was,” said Odame Ankrah.

“Wrong has no colour and we want to stress that whether you or Caucasian, Black, Caribbean or any race, it doesn’t matter, and we need to call this what it is.”